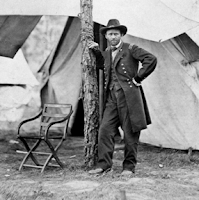 The latest issue of Newsweek (billed as The (mostly) Big Thoughts Edition) features a Quiz whereby one may test one's knowledge of important matters. As usual, some of the questions are easy if one has, over the past decade, been avoiding Mars ["Which of the following [alcohol, carbohydrates, protein, fat] contains the most calories?"], and some of them only purport to test one's knowledge, as opposed to one's ability to guess ["Between 1980 and 2006, how many weather-related disasters caused more than $1 billion in damages at the time of the event?"].

One question, though, was neither of these. "How many presidents," the Quiz demands to know, "achieved the rank of general or higher?" Our options: 2, 3, 5, 7. First off, "higher"? I don't suppose they mean Commander-in-Chief, because then the answer would, I imagine, be 43 (or 42, if we only count Cleveland once). And the only reason that we know that it is Presidents of the U.S.A. whom we are looking for (so Charles De Gaulle doesn't count) is a big picture (not the one above), of our 18th President. Now of course once we've established what we're talking about, anyone over the age of 30 should be able to get two more of these guys right away, as we went to grade school back in the days when such facts were impressed upon us as the branding iron is impressed upon the helpless calf. But I digress.

And this indeed is Newsweek's own answer: the guy pictured, that guy, and that guy. No more. But there are more, aren't there?

As it happens, Wikipedia is a bit coy w/r/t a couple of them, and I'm not so motivated as to, like, get out biographies from the library. But the other guys were certainly generals. I await the outraged cries, in next week's letters section, of the editors of X's collected correspondence, and the curator of the Y estate.
Posted by Duck at 8:25 PM

Only a four-star general could appropriately be said to have achieved the rank of general. I mean, if they want to split hairs, which apparently they do, being sacks.

Thanks vernunft, that's got to be it. In this sense, General X, a Major General, isn't a "general". In the military context, that's fine, but for the purposes of this quiz, it strikes me as – and I say this with all respect for the dignity of mentally disabled persons everywhere – retarded.

Oh, and "higher" than "general" in this sense? Field Marshal. You're welcome.