Let's not read too much into this

Abbas just sent me this picture: 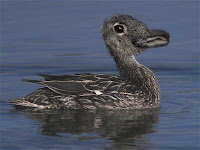 The title of his email was "Duckrabbit!", but when I looked at it, all I saw was a duck. I mean, it's a duck – it's got wings, it's swimming in water, the whole duck bit. But then I looked more closely at the head, trying to see it as the rabbit-looking-the-other-way which is the other aspect of the famously ambiguous drawing. I succeeded; but it turned out to be a particularly unpleasant instance of aspect-dawning, as that perception was accompanied by a sickening wave of, let's say, Unheimlichkeit, as perhaps expressed in the utterance "Yikes, that is one seriously deformed rabbit" (what with the wings and all).

Then I looked at it a third time, and I noticed that indeed, it was picture of a duck onto which a rabbit head had been Photoshopped. (No doubt those who are more familiar with these creatures would have noticed that right away, but I rarely see either in the, um, flesh.) Now, having noticed the rabbit head as a rabbit head when looking to see the image as a rabbit, I now see the duck as well (and can hardly believe I failed to do so earlier) only as a seriously effed up specimen of its kind – I mean, look at that soft furry beak!

So, a clever trick; but (to be way too literal about it) I think we lose something in the translation to photography. The duck part is clearly a duck and only a duck; and the rabbit part (once you see it!) is clearly a rabbit and not a duck. So in a way it's really not an ambiguous figure at all, just an impossible one – where the point of the duck-rabbit figure is that it really is a picture-duck, just as much as any other, and a picture-rabbit as well ... but not at the same time. And off to the philosophical races we go.
Posted by Duck at 10:20 PM

I recommend Cyriak's "Baaa" as a post-duckrabbit animal melt. Here!. Shamelessly linked to my own channel. Disgusting self-promotion.