I see the page 123 meme has come around again. (See here for last time. Which reminds me, I should finish labeling my archived posts.) Daniel (my tagger) has a good one (as in relevant to the blog's content), but (in that respect) it will be hard to beat this one – yikes, that's creepy.

Speaking of creepy, check this out. I don't want to obey the rules this time, since I haven't moved the books from the last book sale off of my desk, and we've already heard something (something more entertaining than p. 123, I can assure you) from The Golden Bough. So this is 123/5 from another book I'm currently reading:

If someone had come then to lead me away to a place of execution I would have gone meekly, without a word, without so much as opening my eyes, just as people who suffer from violent seasickness, if they are crossing the Caspian Sea on a steamer, for instance, will not offer the slightest resistance should someone tell them that they are about to be thrown overboard.

No, it's not H. P. Lovecraft, though this whole passage does sound pretty overheated out of context (that's some simile, isn't it?). I actually prefer the rules of the previous go-round, which told you simply to give the one sentence, letting us guess the context. This time we are told to provide three more sentences, which is a bit less fun; but let's go ahead anyway, and see if we can't give Tom (above) a run for his money.

The cause of our man's malaise, it turns out, is writer's block:

Whatever was going on within me, said Austerlitz, the panic I felt on facing the start of any sentence that must be written, not knowing how I could begin it or indeed any other sentence, soon extended to what is in itself the simpler business of reading, until if I attempted to read a whole page I inevitably fell into a state of the greatest confusion. If language may be regarded as an old city full of streets and squares, nooks and crannies, with some quarters dating from far back in time while others have been torn down, cleaned up, and rebuilt, and with suburbs reaching further and further into the surrounding country, then I was like a man who has been abroad a long time and cannot find his way through this urban sprawl anymore, no longer knows what a bus stop is for, or what a back yard is, or a street junction, an avenue or a bridge. The entire structure of language, the syntactical arrangement of parts of speech, punctuation, conjunctions, and finally even the nouns denoting ordinary objects were all enveloped in impenetrable fog.

Whew! Glad I wasn't reading Proust. But let's go on – he's just getting warmed up: 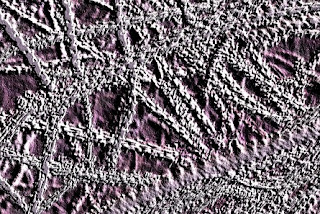 I could not even understand what I myself had written in the past—perhaps I could understand that least of all. All I could think was that such a sentence only appears to mean something, but in truth is at best a makeshift expedient, a kind of unhealthy growth issuing from our ignorance, something which we use, in the same way as many sea plants and animals use their tentacles, to grope blindly through the darkness enveloping us. The very thing which may usually convey a sense of purposeful intelligence—the exposition of an idea by means of a certain stylistic facility—now seemed to me nothing but an entirely arbitrary or deluded enterprise. I could see no connections anymore, the sentences resolved themselves into a series of separate words, the words into random sets of letters, the letters into disjointed signs, and those signs into a blue-gray trail gleaming silver here and there, excreted and left behind it by some crawling creature, and the sight of it increasingly filled me with feelings of horror and shame.

I don't feel like tagging anyone, but if anyone wants to join in, go ahead.
Posted by Duck at 8:38 PM