Life before Amazon and Google

So Daniel recommends the new Eckart Förster book, which I ordered, and now here it is. Looks good, and in fact I may already report an interesting bit from it. Check this out (p. 13):


The Critique appeared in 1781 in an edition of one thousand copies and went out of print within just a few years. [...] [I]t is important to remember that (with the exception of Jacobi) the later thinkers who followed upon Kant [...] were only familiar with either the second or even later editions of the Critique. The original edition did not again become available until 1838 when the first complete edition of Kant's works was published—seven years after Hegel's death! Today's practice of printing the first and second edition on facing pages or at least in the same volume was unknown in those days. Neither Fichte nor Schelling nor Hegel was familiar with the first edition of the Critique, and we must remain open to the possibility that this fact might have had consequences for the manner and extent to which they understood themselves to be engaged in a Kantian project.

Wow, I totally did not know that. Of course you might think, well, the B-edition is Kant's considered view, so what does it matter? But even the A-deduction alone is hugely informative about what Kant thought he was doing (and I always liked the threefold synthesis anyway). And Förster has promised to say more about this later, so I look forward to that.
Posted by Duck at 9:50 PM 3 comments: 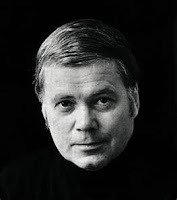 When I was in high school I was a big fan, and it was a huge thrill to see him at Lincoln Center in an all-Schubert program (not Winterreise, but some good stuff nonetheless). I never warmed to him as an opera singer for some reason. You would have thought that his wonderfully lyrical singing, which worked so well for lieder, would be ideal for roles like Rodrigo (in Don Carlo) and Iago, and he's recorded both, but I found the very familiarity of his voice distracting there. He also sang the Rheingold Wotan, I think, but I never heard that (and again the very idea seems weird). My favorite record of his at that time was not Schubert but Mahler, a duo record with Leonard Bernstein on piano. I think it had the Kindertotenlieder on one side but I only ever listened to the other, which had (the first four of) the sublime Rückert-Lieder, of which "Ich atmet' einen linden Duft" is the most beautiful song ever, full stop.
Posted by Duck at 8:03 PM 1 comment: