Why cats make a huge mess (like they need a reason) 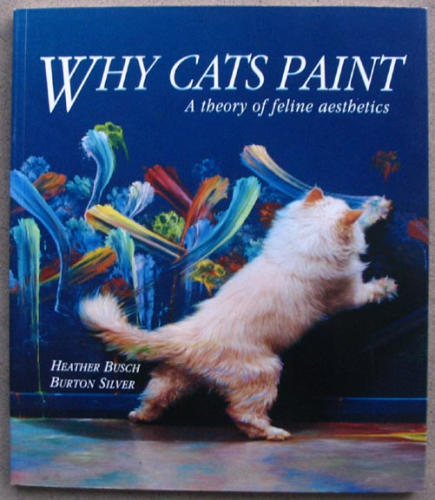 Over at Crooked Timber the other day, I opined (uncontroversially enough) that Rorty’s preference for novels over philosophy as a vehicle for moral progress shows his belief in the priority (in this sense) of imagination over deduction or even cognition. I then revealed that a book I was reviewing had as its epigraph Albert Einstein’s dictum that “In order for something to be so, we first have to think it.” I like this quote. First it provokes, with its apparent flirtation with idealism, offending our everyday intution (i.e. the one that makes realism seem obviously true and idealism wacky) that things can indeed be a certain way, even though no-one has ever thought it. Then we see a more congenial reading, more in line with Rorty’s attitude: we cannot work effectively toward a future we have not imagined. No imagination means complacent capitulation to the status quo. Or perhaps (more in line with this case, as we shall see), it says that we cannot see something to be the case unless we first think it, i.e., as a hypothesis (very plausible, if a bit boring). Finally (maybe, if we’ve been thinking about this stuff already) we take another look at the “idealistic” reading. Is it really “idealistic” to suggest that objectivity cannot in principle outstrip our conceptual capacities? In other words, is Kantian “transcendental idealism” really idealism?

Naturally realists will say it is. And if you were determined to spin it that way I suppose you could; but then “idealism” wouldn’t be so bad (i.e. if realism were the only alternative, it looks like a wash). I’m with Putnam here: the mind and the world jointly make up the mind and the world. Or at least that’s as good a slogan as you’re going to get. But let’s leave that business for another time.

Anyway, that’s the epigraph. Let us turn, at long last, to the book itself. I say “at long last” because in a post some time ago describing my haul from a local library’s semiannual book sale, I mentioned that I would put off until later my account of a particularly remarkable book. Here, finally, is that account.

Our book is entitled Why Cats Paint: A theory of feline aesthetics, by Heather Busch and Burton Silver. As you can see above, the cover photograph looks for all the world like a cat making a purposeful, indeed determined, stroke across a painted wall with his paw, in the manner of [insert name of your favorite action painter here], and the unfinished mural is striking, a colorful and dynamic assemblage of streaks and smudges. The photo credit, on the back inside flap, reads:

Flipping through the book reveals many similar photographs of cats at work, or of the finished products themselves, some of which, like Birdies, are quite eye-catching. Are these cats really "painting"? One's first reaction cannot but be: no way (we know the titles how, for instance…?). But when John McEnroe exclaims "You cannot be serious!" he knows full well that they are: that's why he's upset about it. But this – is this a parody? A hoax? A sincere but deluded claim? (A startling discovery?) At first it's not clear.

The publication info page, across from the table of contents, contains two interesting tidbits: at the top, the aforementioned Einstein quotation, and at the bottom, an official-looking notice that "Why Cats Paint is a recognized international experiment in inter-species morphic resonance and is designed to test the hypothesis of formative causation. I.E.# 644-38837-59." Curiouser and curiouser.

The book is divided into four chapters. "An Historical Perspective" tells the story of cat painting (again, that's painting by cats) throughout history, from ancient Egypt (presumably real mummified cats are shown with their possibly not-so-real papyri) through medieval times (a somewhat less authentic-looking illustration of a cat at an easel, c. 950 A.D.), up to the modern era (a poster advertising in idiomatically purple prose ("Spellbinding Displays of Artistry Hitherto Unknown") an 1880's appearance by Mrs. Broadmore's Amazing Painting Cat).

Chapter 2 discusses "Theories of Feline Marking Behavior," suggesting a biological basis for this activity in territorial marking, and revealing soberly that there remains some controversy over whether and to what extent we can regard cat painting as having anything like an aesthetic or expressive motivation. A biologist is quoted as demurring, seeing this behavior as "no more than obsessive-compulsive play activity resulting in randomized marks of no meaning whatever." But it seems there are other views.

Chapter 3 introduces us to "Twelve Major Artists" and their painting styles, which range from Pepper's traditional portraiture to Charlie's "Peripheral Realism" to Rusty's "Psychometric Impressionism." Naturally, streaks and smudges dominate, as in some forms of human painting, rendering some of the paintings rather dull, but some of them are quite attractive. In this section the authors acknowledge the difficulty of interpreting cat painting, but claim, at least with respect to Misty's "Formal Expansionism," as manifested by 1993's A Little Lavish Leaping, that "[t]he power of this sort of cat art lies in its very incomprehensibility which enables it to provoke and intrigue." Hmmm.

Chapter 4 adds another dimension to the story of feline creativity, discussing "Other Forms of Artistic Expression," including "appropriated" household objects (usually clawed furniture), litter box patterns, and installations (wool, dead mice). Here the joke (for that is of course what it is) gets a little thin. The cited review of Radar's 1994 Infra-mice gives it the old art-school try ("Their tiny bodies, wet and dishevelled, merge together as if swept along by some powerful force, yet only their heads join—a union of spiritual intent, a brief harmony of vision that is made all the more painfully real by the wide gulf that opens between their bodies and long flowing tails"), but the accompanying photo shows all too clearly, alas, just a pair of dead mice. No one could possibly believe otherwise.

What I found particularly interesting about this, philosophically speaking, was not the cleverness of the joke (which is only moderate, given its somewhat tired genre, that of pretentious-art-criticism/my-kid (or whatever)-could-do-that spoofery) or the difficulty (which after all was not great) of determining that that’s what it was. Rather it was the very idea of what to consider in deciding between such wildly competing interpretations. After all, Davidson’s radical interpretation thought experiment of course assumes sincere and cooperative informants, not elaborate hoaxters. Equally obviously, however, the principle of charity notwithstanding, such a possibility is an intelligible one. Once you consider this possibility, however, not only the correct interpretation of your observations up for grabs, but also the content of these observations themselves. At first I thought that this context added a particularly Davidsonian wrinkle to this unoriginal (e.g. Hansonian) observation – but eventually I decided it was more like your garden-variety “fool me once, shame on you; fool me twice, shame on me” increase in level of doxastic circumspection.

Still, the phenomenon is an interesting one. At first, we see the pictures of cats “painting” and simply doubt that that’s the right way to think of it. The resulting marks do resemble abstract painting; but who knows what the cats are actually doing? They’re probably just using the wall as a scratching post (and are presumably declawed). Maybe they're "marking their territory"; or maybe they're just trying to get the paint off their paws. Or maybe they are fascinated by the marks they're making, and they're even dipping their paws in the paint for that very purpose (as B & S imply that they're doing).

Or maybe they're not doing it at all. Again, once the idea of a hoax or parody is considered, much of what we had been taking for granted (for the moment anyway) is now in doubt. Now the interpretive possibilities multiply: and my “Davidsonian” point again here is that "interpretive" activity must include determination of fact as well as of meaning. (Actually, that is a good point, even if this example doesn’t actually make it any better than the original thought experiment did; still, some people still aren’t getting it….)

That is, what's really happening here? By which I mean not: what's the real explanation for this behavior? but instead: what IS this "behavior"? In some of the photos it certainly seems that the cats are themselves making the marks. But of course there are many kinds and degrees of photographic trickery. Even if they are making the marks – which in itself seems plausible – maybe the owners/handlers (whether the authors or others) dip their cats' paws in paint in order to encourage it (though when the artist, e.g. Misty, decides to extend the work “off canvas,” rendering the work more of an installation than a detachable (sellable?) piece of art, that may not be such a good idea).

For the record, as you may know, there is indeed an ongoing research program in "formative causation,” as instigated by Rupert Sheldrake's A New Science of Life for example (here is the Amazon link to prove it; see also here). Of course maybe he's kidding. But then we would have to ask (given his own straightfaced prose): do the authors know this? In any case many defenders of "homeopathic medicine" (or do we even need those quotation marks? What difference does it make?) look to this hypothesis as providing a theoretical basis for their practices. They at least don't think he's kidding (nor do I, as it happens). In any case, when we have multiple layers of possible hoaxing, or even bizarre error, our interpretive possibilities can get out of control in a hurry.

Anyway, here's how I myself in fact decided once and for all that it was not meant seriously (i.e., even as a hoax). After continuing to flip through the book looking at the pictures (it is a coffee-table book, after all), I finally found conclusive evidence in the back of the book, in the "selected bibliography." I seriously doubt there's really a periodical called New Cat Art, or a book called More Paw Less Claw: Helping Your Cat Develop a Better Technique (let alone Paws for Thought: The Magic & Meaning of Litter Tray Relief Patterns) but not all of them are so obviously phony. Understanding Art Writing, for example, is probably real – and maybe The Cat's Mind, or even The Language of the Tail. Hard to say. After all, that the thesis is wildly implausible doesn’t mean it’s a joke. But here's the kicker:

At first this isn't any more questionable than More Paw Less Claw. But of course "R. Mutt" is the signature on Fountain, Marcel Duchamp's infamous inverted urinal, to which this is a sly if unmistakeable reference – through the idea of "urinary embellishment" as well as to the issue of the artistic interpretation of found objects more generally. (There are other intentional giveaways: on p. 75, Bootsie's opus Cocking for Cockatoos (1993) is listed as being part of London's "Scraatchi Collection" – alluding to the actual Saatchi collection.)

For more on this purr-fectly fascinating subject, check out the Museum of Non-Primate Art.
Posted by Duck at 11:21 PM

Wow. I'm not sure what I was expecting, but it wasn't that.

I had to look the book up to make sure you weren't pulling a fast one with it.

Which I suppose fits with your point....